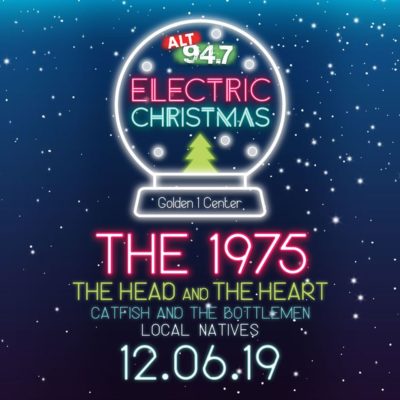 Alt 94.7 Electric Christmas returns on December 6th for its best show yet! The 1975, The Head & The Heart, Catfish & The Bottlemen, and Local Natives grace the lineup this year for a sensational one-night show to kick off the holidays.

The 1975 – Following up four critically acclaimed EPs, British alt-rockers The 1975 made their highly anticipated album debut in 2013, edging out the Nine Inch Nails’ comeback record for the No. 1 spot on the UK Albums Chart. Featuring the band’s signature blend of classic ’80s pop and ethereal electronic elements, the self-titled album’s outsized drum breaks and kaleidoscopic guitar work translate beautifully in concert settings. Hot on the heels of a string of intimate performances in 2013, The 1975 have fans eagerly awaiting their 2014 North American tour dates.

The members of The 1975 have been making music together since 2002, but it wasn’t until 2012 that they began recording under the moniker. Over the course of 2012-2013 the band released 4 EPs, exploring a variety of styles ranging from synthpop to shoegaze. Their self-titled 2013 debut synthesized these elements, topping the UK Albums charts and spawning five singles including “Chocolate” and “Sex.” Encoring their 2013 US shows, the band will treat North American fans to another batch of intimate performances in 2014.

With an infectious style that combines folk, country, pop, and smart songwriting, Seattle, Washington’s The Head and The Heart have earned a reputation as a consummate live act, charming concertgoers with their layered arrangements and intricate vocal harmonies. In 2013, the band released their most confident and mature album to date, Let’s Be Still, featuring lead single “Shake,” an indie folk stomper that perfectly captures the energy of the band’s live performances. After meeting at various open mic nights around Seattle, the band officially formed in 2009, touring the Pacific Northwest before releasing their self-titled 2010 debut album. The buzz of that album attracted the interest of several labels, and the band ultimately signed to Sub Pop Records, who re-released The Head and The Heart LP in April 2011 with additional material including “Down In The Valley, “Lost in My Mind,” and “Rivers and Roads.” The band toured widely throughout 2010 and 2011 as a supporting act for Dave Matthews, Death Cab For Cutie, and The Decemberists, also headlining their own shows before returning to the studio to record their sophomore album. On tour in 2013, the band impressed ticket buyers with their eclectic live concerts, leading audiences through foot-stomping sing-alongs of the indie folk anthems they’ve become known for.

The Head and the Heart will release their four studio album called Living Mirage on May 17, 2019. They start touring in the summer of 2019 with 39 dates in support of the new album along with the alternative rock band Hippo Campus on select dates.

U.K. indie rockers Catfish and the Bottlemen are on the rise thanks to their blend of passionate songwriting, memorable melodies, and sonic exploration. In concert lead singer and guitarist Van McCann bares his soul with his yearning vocals on instant classics like “Homesick”, “Cocoon”, and “Kathleen”. The rest of the band stirs up a post-punk-inspired sonic cocktail, using echoing guitar feedback, driving bass melodies, and pulsating drum beats to give each song a vibrant undercurrent. Ticket buyers can’t help but join in on the energetic alternative anthems that Catfish and the Bottlemen bring to the stage whenever they go on tour.

Van McCann was born in Cheshire, England in 1992, though he was raised in Llandudno, Wales. He formed Catfish and the Bottlemen in 2007 with high school friends Billy Bibby (guitar) and Benji Blakeway (bass), and began performing in parking lots after shows by bands like Kasabian. After adding drummer Bob Hall, the group generated considerable buzz in 2013 with the independent release of the singles “Homesick”, “Rango”, and “Pacifier”. They spent the following year turning in impressive performances at festivals like Reading & Leeds, T in the Park, and Governors Ball. The rigorous touring ultimately paid off when their 2014 debut full-length The Balcony peaked at No. 10 on the UK albums chart before being certified Gold later that year. With fans already buzzing about their follow-up album, Catfish and the Bottlemen continue to give impassioned performances to audiences around the world as they build on their sterling reputation.

Local Natives are one of the finest indie rock acts to emerge from LA in recent memory, consistently delivering the goods ever since capturing the hearts of hipsters everywhere with 2009’s Gorilla Manor. The band played together for several years prior to their debut release, and it shows — their undeniable on-stage chemistry radiates into the crowd as they nail three-part harmonies on “Who Knows Who Cares” and power through extended jam sessions on “Sun Hands”. Back on tour Local Natives are set to play a number of dates, treating fans to their thrilling live performances and incredible musicianship.

Four-piece indie rock outfit Local Natives formed during their college years at UCLA, where they collectively lived in a house dubbed “Gorilla Manor” – a name they later used for the title of their 2009 debut album. The release featured fan-favorites like “Who Knows Who Cares” and “Wide Eyes” and earned major acclaim from music critics and fans alike. Since then they’ve toured with Edward Sharpe and the Magnetic Zeros, played a number of festivals around the world, and released their 2013 sophomore LP Hummingbird, a Top 20 hit on the Billboard 200. Local Natives are ready to rock as they hit the road for a string of highly anticipated shows where they’ll treat fans to beloved songs from Gorilla Manor along with new material.