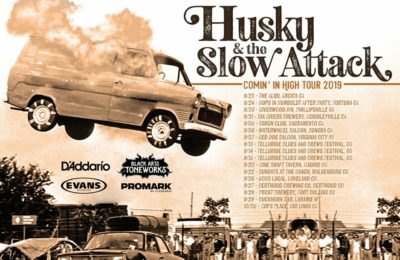 Husky & The Slow Attack is a power trio, rooted in old school high-volume riff rock
Hailing from Northern California by way of Tennessee, frontman Husky Burnette has spent over a decade writing, recording, and touring. Early on, it was the music of Hendrix, Black Sabbath, and early metal that would shape his guitar playing and songwriting. After playing in a handful of bands, including high-energy rockers Polecat Boogie Revival, he would spend the next few years as a punk-blues solo artist with a three piece band behind him. Touring the US relentlessly, he released a few albums on the Rusty Knuckles record label. Over time, his music slowly got heavier and he returned back to his rock and metal roots. After his last solo release, Husky and his bassist took time off to write/record, forming The Slow Attack, and immediately released a collaborative effort with speed-rockers Six Speed Kill.

Over the years, Husky has had the pleasure of touring with such greats as Hank Williams III, The GD Gallows, and more. He’s also shared the stage with many others such as Buzzov*en, Cro-Mags, EyeHateGod, Leon Russell, Shooter Jennings, Legendary Shack Shakers, Murder Junkies, Antiseen and Guy Clark/Emmylou Harris.