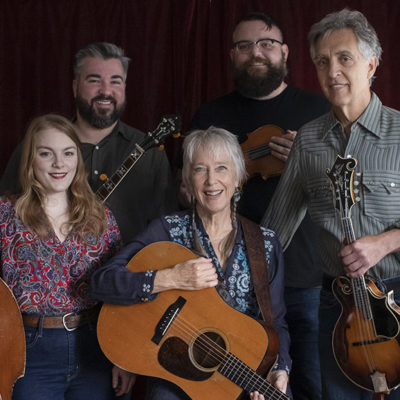 “Whatever country music is supposed to be, she’s at the center of it.” — Utah Phillips

“Her voice is a rare combination of grit and grace, strength and delicacy. Her stories are always true.” — Linda Ronstadt

Grammy Award-winning musician Laurie Lewis is internationally renowned as a singer, songwriter, fiddler, bandleader, producer and educator. She was a founding member of the Good Ol’ Persons and the Grant Street String Band and has performed and recorded since 1986 with her musical partner, mandolinist Tom Rozum. Laurie has twice been voted “Female Vocalist of the Year” by the International Bluegrass Music Association and has won the respect and admiration of her peers.

With Tom Rozum on mandolin and vocals, Patrick Sauber on banjo and vocals, Brandon Godman on fiddle and Sam Grisman on bass and occasional vocals, The Right Hands specialize in that good old-time Berkeley hillbilly sound. Their 2016 album, “The Hazel and Alice Sessions,” was nominated for a Grammy for Best Bluegrass Album of 2016.

A pioneering woman in bluegrass, Laurie has paved the way for many young women today, always guided by her own love of traditional music and the styles of her heroes that came before. At the same time, she has steadfastly followed her personal muse and remained open to new influences.

Find other events tagged under: the palms playhouse, winters