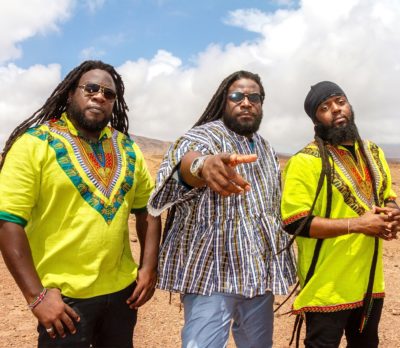 Morgan Heritage – In the wake of their historical GRAMMY win for Best Reggae Album as the Producer and Artist for “Strictly Roots”, which was released under their own independent label CTBC Music Group, the Iconic GRAMMY Award-Winning cultured driven band has managed yet again to deliver another classic album. They achieved this by staying true to their formula of authentic Reggae with an effusively eclectic mix. In their latest quest to keep Reggae music relevant in a continuously evolving world of music, Morgan Heritage presents “Avrakedabra”.

Their Rolling Stones-reminiscent endurance, longevity and outstanding showmanship, makes the siblings a force to be reckoned with. Not only in Reggae but also in music as a whole. Morgan Heritage’s name is duly cemented in history, as critics, fans and music lovers anxiously awaited their new album. The untraditional creation of this album with recording sessions taking place across 3 different continents highlights the groups effort of taking Reggae music to the 4 corners of the Earth.

As you listen to “Avrakedabra”, surprise appearances are as captivating as the title. From the opening record “Want Some More” featuring Mr. Talkbox, the famed computerized voice featured on Bruno Mars’ 24K Magic, the album makes a statement.

A Royal appearance by Multi GRAMMY Award-Winning Ziggy Marley and Stephen Marley is a brilliant alliance of two great musical legacies on “One Family”. That was followed by the awakening of the spirit of the late great lead singer Bunny Ruggs of legendary Third World on the “Tribute To Ruggs”. On stage DreZion performs as a keyboardist with the group but on “Reggae Night” he not only co-Produced a fun loving song, he also lays down a great verse like a young veteran DJ from Jamaica. On “Ready For Love” what seemed like an unpredictable pairing of Billboard chart topping duo R. City and the Reggae super group, blossomed into a beautiful love song. The last appearance on the album brings together Kabaka Pyramid and Dre Island who have respectfully made their claim as 2 of Reggae’s future leaders on the futuristic sounding anthem “We Are”.

“The title was inspired by our love of history. Being that we are students of history, we discovered this word and it’s various pronunciations throughout the history of time. We chose it as the title of the album because we like it and we feel it represents the new Era that our career is about to enter. The meaning we will leave to the audience to choose, since we’ve discovered so many over the dispensation of time”, explained Morgan Heritage about the album title “Avrakedabra”.

Sultry vocal fluctuations, smooth riffs, upbeat percussion, unique guitar style paired with rhythmic chants and thoughtful lyrics deliver an album that will not only make you dance and feel good, but still remains fresh to the ears.

Heir to the throne, the first to fill the 3rd generation of the legendary Royal Family of Reggae Morgan Heritage, is the son of Gramps Morgan.

Jemere has Toured in front of thousands across the globe as an opener for his family. From Africa, Australia, South America and across the European waters. This 6 year blessing has instilled experience, hardship, humility and understanding as he transitions into his growth as a man. In addition, Jemere has toured under his father’s wing during the Gramps Morgan solo projects. Jemere steps into his duties of spreading the word of love and unity for the people worldwide as he is, for reggae music at the very least – the definition of his name, a “Wish Come True.”

His first released record, “First Kiss” launched his career in 2011, and the following year “Sunshine Glow” was released along with a music video he shot on his favorite island of Anguilla. Jemere’s growth continued as his first hit single “Neighborhood Girl”, released in 2013, proved his sweet tone belonged amongst the best of current young reggae stars landing #1 on the iHeart radio charts. From that moment, Jemere continued constant touring as his family’s opening act and gaining loyal fans worldwide where he released dynamic records and covers along the way with notable collaborations with the likes of Jo Mersa Marley, J Boog, and Stonebwoy.

Rightfully so, his most rewarding collaboration was on the single “So Amazing” of Morgan Heritage’s Strictly Roots Album in 2015. Jemere can now say he is a Grammy Award Winning Artist for his feature on the Best Reggae Album.

When asked about what carried Jemere along this path, he simply said,

“There’s a right way and there’s a wrong way….you choose one!”