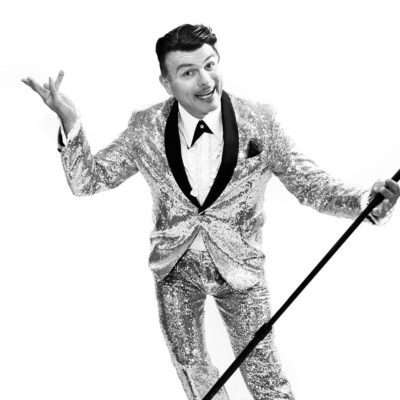 with His Double P Revue!

Peter Petty is a Sacramento, CA based band leader that tests (and coins) the adage “There are no small rooms…” Charged with the singular mission of reinterpreting music that scintillates, syncopates, and sometimes even educates, Mr. Petty swings out with the frenetic elegance of a Tasmanian devil in a tuxedo leading some of the finest stewards of traditional jazz in any area to piggyback on the shoulders of such giants of the genre as Duke Ellington, Count Basie, Louis Armstrong, Mildred Bailey, Cab Calloway and Joe Williams. Then he leaps over to stomp on, and ride the coat-tails of undisputable legends like Ray Charles, Louis Prima, Roy Orbison, Shirley Bassey, Tom Waits, and David Bowie, singing every note of his 3 2/3 octave range with inexhaustible power and captivating control. Throwing out novelized lyrics, and even a few original tunes, it’s an infectious, eclectic, electric, acoustic mash-up that not only connects the dots between seemingly disparate musical genres, and artists, but does it with an adventurous and hilarious theatricality that entertains the “swell” out of audiences of all ages. Peter Petty has worked with The Capital City Stage, Music Circus, done voice work for the State of California, starred in a series of industrial training films for Tower Records and in the independent GIG Ventures feature film, Jump-Cut. Mr. Petty has recorded with Elektra recording artists Papa’s Culture and Columbia Records’ Cake, and was one of the founding members of the Valdo Herby tribute band, “Swing This!” Peter sang with the Sacramento Opera through 8 seasons, was the vocalist and emcee of the Harley White Jr. Orchestra, and performs for the Sacramento French Film Festival. You can currently see him as a member of the nationally touring Rat Pack Tribute band The Deanoholics, and as the singing, Swinging leader of his own Titans of Terpsichore!, and Double P Revue!. His whole life has been leading up to this moment.