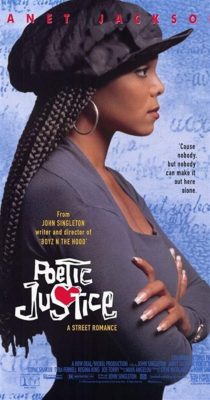 The film is seen through the eyes of main character Justice, a young African-American poet. Join the cast on a long overnight delivery run.

Poetic Justice is a 1993 American romantic drama film written and directed by John Singleton and starring Janet Jackson and Tupac Shakur with Regina King and Joe Torry. In the film, the main character Justice writes poems which she recites throughout the film. The poems featured were written by Maya Angelou, and Angelou also appears in the film as one of the three elderly sisters whom the characters meet at a roadside family reunion. The Last Poets make an appearance toward the end of the film.

Poetic Justice reached #1 in the box office its opening weekend, grossing $11,728,455. It eventually grossed a total of $27,515,786. Jackson received nominations for the Academy Award and Golden Globe Award for Best Original Song, with the Billboard Hot 100 number one song, “Again”. It was later referenced in Kendrick Lamar’s single “Poetic Justice”, which was titled after and based on the film. The song sampled Jackson’s “Any Time, Any Place.”

Despite mixed reviews from critics, the film is considered a cult film especially for the performances and the chemistry between Jackson and Shakur.