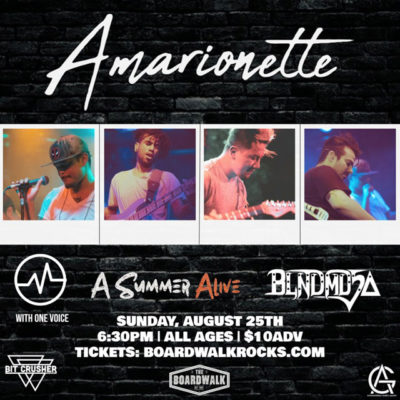 A Summer Alive is a heart felt indie pop rock band residing in Sacramento, California. The group was founded by Katie Hunt and Kenny Seunarine, who both had a vision to create positive, melodic, and uplifting music. In a world that has so many issues, fear, and so much hate, their goal is to bring people together with music in hopes of inspiring happiness and love. Influenced by bands such as The Morning Of, We Are The In Crowd, Anberlin, and Paramore, lead vocalists Kenny and Katie combine catchy vocal melodies and infectious hooks that are sure to get stuck in listener’s heads. The two met in a previous band and both bonded strongly over the pop rock genre, eventually fueling the creation of A Summer Alive. The band was established in summer 2018 and is quickly gaining a following, capturing the hearts of their listeners.