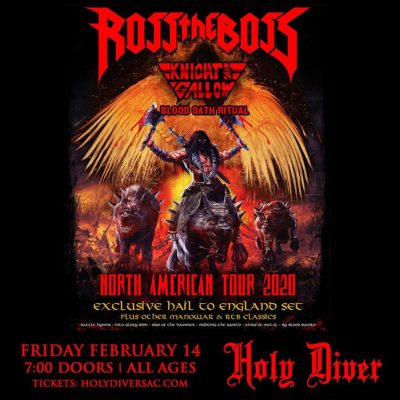 As a child growing up in New York City, Ross “The Boss” Friedman showed great promise as a piano and violin prodigy, but when he first touched the electric guitar he knew he found his true love.

He met Andy Shernoff in 1973 while playing in one of his bands at a house party in his teenage years.

Together, they created a band known as The Dictators, who became the first signed Punk Rock band launching the CBGBs scene. Known for their sense of humor and affection for White Castles and wrestling, they were one of the most copied and influential bands of the genre.

Blue Oyster Cult Producer Sandy Perlman was the manager for both The Dictators and French Rock Band Shakin’ Street in 1979 when Ross needed a gig and Shakin’ Street needed a guitar player. Ross flew to France and floored everyone with his guitar playing. He joined the band, lived in France for a year, recorded an album, learned to speak French and toured the world with the band.

While Shakin’ Street was opening for Black Sabbath and Blue Oyster Cult in 1980, Ronnie James Dio introduced Ross to crew member Joey DeMaio. The two of them agreed on their vision for what a Heavy Metal band should be and together, they co-founded Manowar. They created their own subgenre and dubbed it “True Metal” playing epic songs with viking themes at very loud volumes. His eight years and six albums with this band gained him an unbelievably loyal cult following who widely considers Ross The Boss to be the definitive Manowar guitar player.
The Dictators revamped into a new band called Manitoba’s Wild Kingdom in 1989 that bridged that gap from punk rock to metal, and really allowed Ross The Boss to showcase his kind of guitar playing. Even though each of his bands are a different musical style, he says he’s always, “Just playing Rock and Roll”.

When his son was born in 1991 he stayed closer to home being a great dad and making music with his friends and other New York based musicians. During that time he had a few major releases and played shows with his bands The Pack, the Blues Rock “Heyday” and The Spinatras. The Dictators continued to tour and made a highly acclaimed studio record ” D.F.F.D.”, a live CD “Viva Dictators” , and a Greatest Hits and Early Demos compilation.

In 2005, the time was right for him to join former Blue Oyster Cult drummer Albert Bouchard in his band The Brain Surgeons, winning over audiences with his own style of guitar playing, and kicking the band up a notch into new territory for two albums.

Ross constantly writes and records new music and reunites with his old bands and former band members for special shows and projects. His 2005 appearance with Manowar at the Earthshaker Festival was so successful he formed his own “Ross The Boss” band and signed with AFM Records Germany. His two critically acclaimed solo albums 2008 “New Metal Leader” and 2010 “Hailstorm” saw him playing shows and festivals all over the world, putting him back in front of a Heavy Metal audience and reminding everyone that Ross The Boss is one of the world’s most loved Metal guitar players.

As people started connecting with him on the internet, he began to collaborate with musicians online and guesting on tracks for bands like Majesty, Wotan, Atlantean Kodex and The Vibrators to name a few.

Death Dealer began as an online collaboration but quickly gelled into a supergroup featuring Sean Peck (Cage), Stu Marshall (Dungeon, Empire of Eden), Mike Davis (Halford, Lizzie Borden), and Steve Bolognese (Into Eternity). The band toured the world for their two albums 2013 “Warmaster” and 2015 “Hallowed Ground”.
2016 saw him back playing all-Manowar sets with a cast of revolving musicians. Eventually a touring lineup that included singer Marc Lopes and bass player Mike Lepond gelled. The band recorded an album of original material released in April 2018 and keeps on touring to play to as many people as they can.
Ross The Boss was one of the pioneers of both Punk Rock and Heavy Metal. He’s proud to know that the music he’s made has influenced and inspired so many other artists. You can be sure that whatever band he’s in or whatever style he’s playing in, he’s always happy to be writing new music and playing the guitar with his friends.