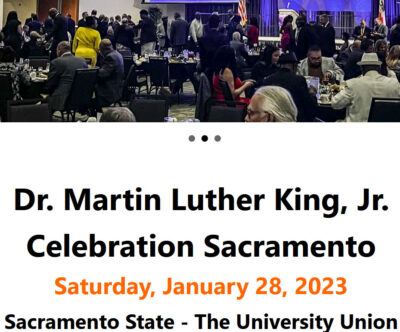 Co-founder, Dr. Dorothy Enomoto, was a classmate and close friend of Dr. King. Their friendship – sealed by sharing valedictorian honors at Booker T. Washington Senior High School in Atlanta – continued through the remainder of his life. Co-Founder, Jerry Enomoto has the distinction of being the first Asian Pacific American to receive a presidential appointment as United States Marshal in 1994, when President Clinton did just that.

The late Congressman Robert T. Matsui served as the honorary co-chair at the inception of the dinner; his wife, Congresswoman Doris O. Matsui took over the role after his death in 2005.

Through peaceful protest, the Reverend Martin Luther King, Jr. spent his life as a social activist working against injustice. Dr. King worked to end the legal segregation of African Americans, founded the Southern Christian Leadership Conference, was a recipient of the Nobel Peace Prize, and his life had a profound impact on race relations in the United States. Since it was first observed nationwide in January of 1986, the holiday commemorating the life of Dr. Martin Luther King Jr. has served as a reminder of his legacy to the causes of civil rights, nonviolent opposition, and community service.

Today we continue to celebrate Dr. King’s commitment to helping change the world for the better. Please join us for the 24th annual MLK Celebration vent on Saturday, January 28, 2023.