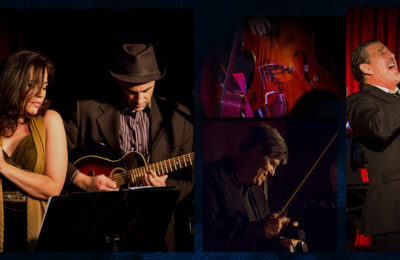 Take an auditory adventure around the world and back again with Global Rhythms, a Crocker concert series that creates connection and community through the arts and spreads love one beat at a time.
All the way from Los Angeles, Paris Chansons offers French music with a global twist. Featuring original renditions of songs by French favorites like Charles Aznavour, Joe Dassin, Edith Piaf, Enrico Macias, and Zaz, Paris Chansons exhilarates audiences with iconic French music and beautiful Italian and Eastern European classics.
BIOGRAPHY:
Paris Chansons is an exciting French band with an Eastern European twist! Recently featured on the French news, they are known for their original renditions of French favorites from Aznavour, Dassin, Piaf, Macias, Adamo, and Dalida, all the way to contemporary artists like Zaz. Their exhilarating performances are punctuated with gypsy jazz standards as well as classics in Russian, Italian, and other languages.
Three multilingual singers bring an unparalleled diversity to their shows. Julia Kantor, originally from the Ukraine, lived and studied in France where she discovered a soul connection with French music that still imbues every performance. She entrances from the stage with a sultry voice and dynamic presence. Together with her husband, Jacob, a Russian-born singer/songwriter, they launched Paris Chansons.
Max Cohen grew up in Morocco, steeped in French music, particularly the songs of Enrico Macias. Max’s rich velvety tone delivers beautifully nuanced renditions of his favorites, complete with a signature North African lilt.
Superb musicianship anchors the ensemble, effortlessly moving from jazzy improvisation to slow-burning balladry to blistering gypsy fervor. All seasoned pros, the musicians are Jeff Lams on piano, Adam Cohen on upright bass, Endre Balogh on violin, Sinclair Lott on drums, and Jacob Kantor on guitar. Paris Chansons takes you an a journey without leaving your seat, a spectacular celebration of French and international music that brings the world that much closer.